Jimmy Gallagher lets it all Blow!

DSG are proud to Present Jimmy Gallagher first solo single release with The Soul City People which is currently cooking up a storm with only two copies out there! 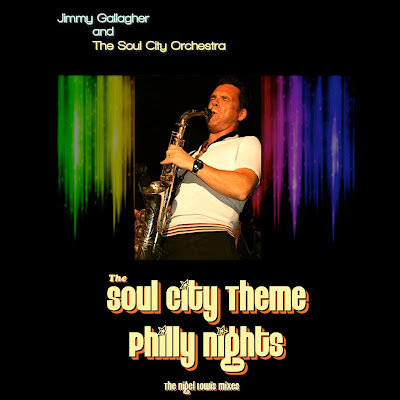 Jazz Fm's John Osborne has been playing it on his Saturday Night 'Funky Sensation' show which has lead to many people asking where they can get hold of the track, John said it's making him move parts he has not moved in years!

The Soul City Theme is part of a double a side with Philly nights where i'm sure you will feel the Philly Bumping influences from the likes of The Salsoul Orchestra, Love Unlimited or indeed MFSB.
All about Jimmy .... Jimmy Gallagher The Saxophonist who is so musically talented that plays Alto,Soprano, Tenor saxes.Flute, wind , Synth,Vocals & also Keyboards.
Jimmy's Early Years….

He started playing sax when he was just 10 years old and would often be seen playing weekends with the wedding band in his dads pub. When Gallagher reached 16 he was busking in Glasgow with some mates and was approached by a man named Elliot Davis. This led to touring with a band called Morrocan Coco,and then to a Scottish tour with label mates wet wet wet.
He decided around 18 that he wanted to be in London working, so after attending a Jazz summer school he joined a band with a guy he'd met there called Len Arran. The band was called Siren and featured Dominique Atkins on vox, len on guitar, Gallagher on saxes. After the band changed it's name to Big Blue Sea they did pretty well for 4 or 5 years.
He then embarked on a session career with my first successful recording being 3 tracks for a band called Bros of 'When Will I Be Famous' fame.
Soon after he then met Nigel Lowis which led to various sessions between 1988 and 1998 for such people as Vanessa Mae, Dina Carroll, Tom Jones, Eternal, Louise, Terry Ronald, Sara Brightman, London Beat, Soup Dragons,Guru Josh,Therapy? To name but a few.
During this time when Gallagher wasn’t touring or recording, but often did gigs around London with The Gill Manly Band at Ronnie Scotts,The 606 Club,China Jazz, Pizza on the Park with Ian Shaw at the Vortex and Pizza Express. With Mark Murphy, Helena paul. Gallagher played on Ola Onabule first album which also included touring as part of Ola's band.
The Continental years….
Around 1997 he received an offer from an old friend Jason Wright,to relocate to
Germany, which led to working with a 14 piece band playing all over Europe.
Gallagher now resident currently in mallorca and play around 300 gigs a year as well as working with The Soul City Orchestra and Nigel Lowis!
Jimmy Gallagher & The Soul City Orchestra will be released on Friday April 7th on Full length download on DSG through iTunes and Amazon or a short version via streaming sites.