After a year of planning the big Disco Soul, all dayer is almost upon us on Saturday 14th October at
The Grand Burstin Hotel, Marine Parade, The Harbour, Folkstone, Kent, CT20 1TX. 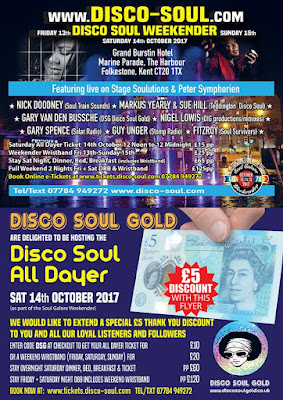 The show starts at midday until midnight with DJ's Nick Doodney (Soul
train Sounds), Markus Yearly & Sue Hill (Teddington Disco Soul), (Disco) Gary Van den Bussche (Disco Soul Gold, DSG), Fitzroy (Soul Survivors Magazine), Guy Unger (Stomp Radio), Gary Spence (Solar Radio) who has been voted a national treasure by his listeners, Nigel Lowis (Dig Productions, Songwriter, producer, remixer) Nigel is all set to make his all dayer debut on the Folkstone stage with a set of tunes that is impossible to hear anywhere else! Nigel has been rehearsing for the past three months in creating a set of tunes that you will know, but with live parts added as if he was producing a remix, but he will sho nuff be in the mix!

You will also get to hear exclusive DSG tracks from the forthcoming CD album that will not be available until the CD is released in November. The label started 5 years after discovering the then unknown SouLutions, a demo version of Listen had been sitting in a drawer for over seven years, when Linda Lucas (Louise SouLutions Mum) sent it to DSG head of Music Gary Van den Bussche, who after a break from the music industry decided to make that the first release on his new record label DSG! The song reached #1 on the Soul charts with a Drizabone remix Gary arranged and they have gone on to not only have other number ones but have established themselves as the UK's #1 modern Soul band. Louise's voice is not too be missed live,  SouLutions were recently invited to support Melba Moore (This Is It, Love's Comin At Ya) at her recent sold out Jazz Cafe concert in London.
Peter Symphorien The Soul Man had been singing in his local area for years, Beverly Creswell sent DSG's Gary Van den Bussche a clip of Peter singing The Love I Lost at a pub gig on an exclusive video, Gary tracked him down, introduced Peter to Nigel Lowis for production on a Soul City People release that would feature Peter on lead, we both agreed Peter could easily be a modern day Eddie Levert (O'Jays) or indeed Teddy Pendergrass, the most amazing thing, around six weeks later Nigel Lowis listen to the clip not once but like me three times, I thought you already heard it before Peter started recording? Nigel said no, I could not find it, so I took your word for it!

12 hours of the music with DJ's, SouLutions, Peter Symphorien all this for only £10 when you use the DSG £5 discount code at the checkout click here