The Legendary Alicia Myers comes to the UK to sing live at The Jazz Cafe on Sunday October 13th with special guest support from Soul singer Miracle Thomas who's been described as the next Anita Baker! 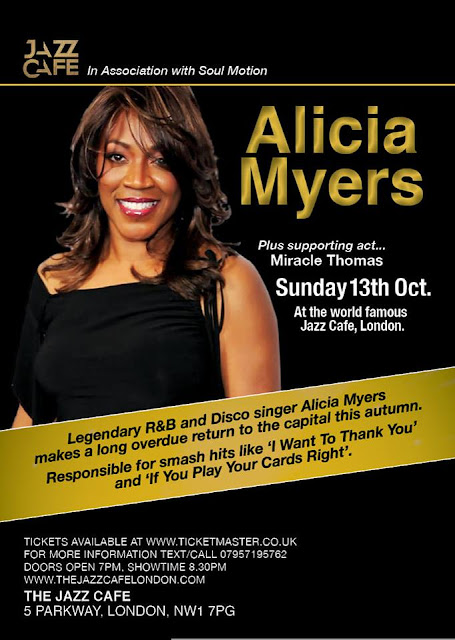 Alicia Myers begun her musical career as a member of Al Hudson & the Soul Partners, who later evolved into One Way, They released the album 'Happy Feet' as Al Hudson and the Partners in 1979 which contains the top 15 national hit single "You Can Do It" which was co-penned by Myers. Al Hudson & The Soul Partners not only changed labels from ABC records to MCA records, but also confusingly the name of the band to One Way! The UK National charting follow up was 'Music' followed on from 'You Can Do It' into the UK Charts and onto the bands first album for MCA called One Way which featured Al Hudson and Alicia Myers.
After being a member of a band, she started her solo music recording career in 1981, with the release of Alicia by MCA Records The album charted top 50 In America and had "I Want To Thank You" (top 5 USA R&B Chart) and "Don't Stop What You're Doin'' were released as singles from it. Her follow-up album, Alicia Again, released later the same year, failed to chart, so we had to wait until 1982 the following year for another R&B top 30 hit album called, 'I Fooled You This Time' this was now her most successful charting album to date and included the Anthem 'I Want to Thank You' which is still played out in Soul venue's around the world to this day.
In 1984 Alicia Myers just fell short of The USA R&B chart peaking at #12 with her album ' I Appreciate', but it did chart in the national American Top 200 chart, the single from the album "You Get the Best From Me (Say, Say, Say)" peaked at #58 in the UK national chart and was a UK #1 Soul /R&B hit for her.
We now had to wait 27 years for Alicia Myers next album of newly recorded material released in 2011, the album was co-produced by Myers, David Pic Conley (of Surface) & UK's Tim Jones.
Much of Myers music has been sampled by the likes of Mariah Carey ("I Want to Thank You"), Busta Rhymes & Q-Tip, Father MC and many others.
She is a survivor of childhood tuberculosis. She later survived breast cancer in 1998 and has since become an advocate for the disease. 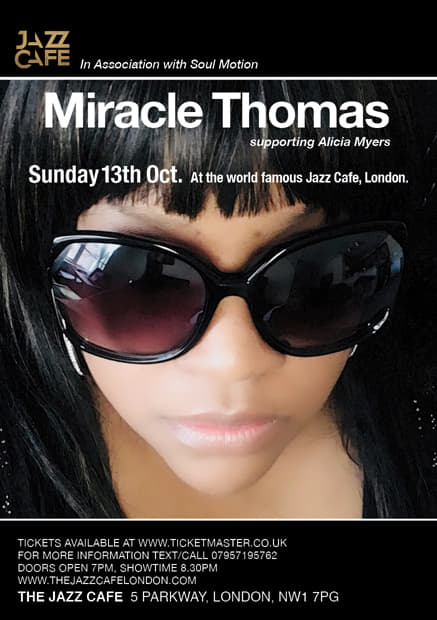 So the date for your diary is Sunday 13th October at Camden's Jazz Cafe in London this Gospel, Soul, Disco, Boogie diva promises to sing her heart out to us! .
Buy Tickets Here